THE HISTORY (AND MYSTERY!)

THIS PAGE IS DEVOTED TO THE STORY, THE WHOLE STORY OF ACTIVE, ACTION 52 AND CHEETAHMEN. NOTHING IS LEFT OUT. I KNOW BECAUSE I WAS THERE………

ACTIVE ENTERPRISES WAS CERTAINLY ONE OF THE MOST INFAMOUS GAME PUBLISHERS TO EVER MAKE THE SCENE IN GAMING HISTORY. NO OTHER COMPANY SEEMS TO HAVE LEFT SUCH AN INDELIBLE MARK ON THE HISTORY OF THE VIDEO GAME INDUSTRY.
TODAY, THE MERE MENTION OF ACTIVE, ITS PROGENY CALLED ACTION 52 OR ITS LASTING LEGACY OF THE CHEETAHMEN HAS EVOKED SUCH HATE AND LOATHING IN THE RETRO GAME WORLD.
THE ACTION 52 GAME WAS NOT PRODUCED IN THE MILLIONS ; COMPANY RECORDS SHOW THAT 13.722 ACTION 52 CARTS WERE ORDERED/DELIVERED FROM THE MANUFACTURER WITH 2,875 BEING ON “PRODUCTION HOLD” AND NEVER ACTUALLY BEING PRODUCED/DELIVERED. THERE IS ALSO SOME QUESTION REGARDING 4,000 OF THE CARTS SHOWING AS PART OF THE 13,722 INVENTORY WHICH MAY HAVE BEEN IN SUPPORT OF A FICTITIOUS ORDER FOR A SALE IN MEXICO WHICH DOES NOT SEEM TO HAVE ACTUALLY TAKEN PLACE, THE “REAL” AMOUNT MANUFACTURED MAY HAVE BEEN LESS THAN 6,900. COMPANY RECORDS ALSO SHOW THAT THERE WERE 3,813 CARTS ON HAND SHORTLY BEFORE THE BUSINESS SHUT DOWN WHICH WERE NEVER ACCOUNTED FOR.

CHAPTER ONE: IN THE BEGINNING GOD CREATED THE EARTH, THEN MARIO, THEN HE SAID, "I NEED ELECTRICITY TO MAKE MARIO JUMP….."
CHAPTER TWO: GOD CREATED LUCIFER, HIS EARTHLY NAME WAS VINCE PERRI
CHAPTER THREE: A FIGHT BROKE OUT BETWEEN GOOD AND EVIL. THE BATTLEGROUND WAS THE EARTH. VINCE PERRI DEVELOPED A PLAN TO CONQUER THE EARTH, THEN GOD, THEN NINTENDO

MAYBE VINCE PERRI WAS SECRETLY ON THE SIDE OF GOOD AND WANTED TO SAVE US FROM THE EVIL NINTENDO, WHO KEPT PRICES HIGH AND STOLE OUR ALLOWANCE MONEY.
VINCE HAD A NOBLE PLAN. HE WOULD DEVELOP 52 ACTION PACKED, QUALITY GAMES, PUT THEM ON ONE CARTRIDGE AND SELL THEM FOR LESS THAN $4 A GAME.
WHAT A GUY, WHAT A HERO! IMAGINE VINCE WORKING LONG HOURS WITH THE BEST GAME DESIGNERS IN THE BUSINESS TO GIVE US NOT ONE GAME FOR $50-$60, BUT 52 OF THE BEST GAMES EVER DEVELOPED FOR LESS THAN $4 A GAME.

MAYBE I SHOULD JUST TELL IT LIKE IT REALLY HAPPENED AND YOU CAN MAKE UP YOUR OWN MIND:
THE STORY AS VINCE PERRI TELLS IT BEGINS WITH A PRESS RELEASE IN 1993:

At 51, Vince Perri has called himself a businessman for a long time. But it took fatherhood to help him find what could be the business of his life.

Perri is the brains behind a 3-year-old Miami company, Active Enterprises Ltd., that is offering a new game product for the six million Sega Genesis systems in the United States. His isn’t just another addition to the hundreds of titles on store shelves. His product, Action 52, offers 52 games for the price of two. An investment banker for six years, Perri has seen his share of business opportunities, good and bad. This time, the idea originated at home.

The breakthrough came by accident.

“I happened to see my son playing an illegal product made in Taiwan that had 40 games on it. The whole neighborhood went crazy over it,” Perri said. “I figured I’d do it legally. It’s obvious when you see something like that, you know there’s something there.”

Perri said he used his overseas banking connections to raise $5 million from private backers in Europe and Saudi Arabia. He farmed out the programming to college students and the technical work to Cronos Engineering Inc., a Boca Raton company that does work for IBM Corp. He expects to begin shipping Action 52 today.

“We’ve sold out of our first manufacturing cycle, so we’re going into another cycle as soon as these go out the door,” he said.

Action 52 is meant to be played on the Sega Genesis system, which, at 16 bits, is faster and more stimulating than the older, eight-bit Sega games. Perri said the 52 games, like G- Force Fighter, Sunday Driver and Haunted Hills, were fashioned for kids between 9 and 12 years old.

Perri said he’d be happy snaring a tiny fraction of the $9.5 billion market for video games. So far, all of his orders have come from oversea s. A sales representative for the United States was hired just two weeks ago, but has already pitched the product to several major retail chains. Perri said Action 52 will sell for $99 to $119, depending on where you buy it. He will sell it over the phone for $99.

Perri’s company might have to clear one more hurdle. Sega of America Inc. in Redwood City, Calif., said third-party developers need a Sega license to sell software for the Sega system. Perri said he doesn’t.

Be advised that besides those who were directly involved in the Action52 project and Active Enterprises, you will be the first person to read about these events.

As I read that sentence in the e-mail I had been waiting for over 3 years to receive, I couldn’t believe that many of my questions surrounding Action 52 and its creationwere about to finally be answered. Throughout those three years, I had searched out every possible person that was connected to the game. I contacted several Vince Perris and Raul Gomilas, among several others, all to no avail.

I contacted people who supposedly met Perri or Gomila,
several later admitting they were just lying. To be honest,
I didn’t exactly know why I was so interested in finding out more about the game, and the company that created it, Active Enterprises. However, I know the answer to that now, but I’m getting ahead of myself…

GAMERS, PLAYERS, HATERS, SKATERS AND FANS SHOULD COME BACK TO THIS SITE OFTEN, BECAUSE I AM GOING TO KEEP ADDING TO THE STORY UNTIL EVERYONE KNOWS THE TRUTH………

I ALSO WILL POST PRESS KITS, NEVER BEFORE SEEN PICTURES OF ACTION 52 AND CHEETAHMEN PHOTO'S, BUSINESS CARDS, ADVERTISING ONE SHEETS AND INFO ON THE MYSTERIOUS VINCE PERRI, THE MAN BEHIND THE GAME. I HAVE INTERVIEWS OF KEY PLAYERS AND MORE CHEETAHMEN STUFF THAN YOU PROBABLY EVEN WANT TO KNOW EXISTED. I HAVE VIDEO TO SHARE, AUDIO TO PLAY AND EVEN SOME HISTORIC COMMERCIALS TO SHOW YOU. WHEN I SAY COME BACK OFTEN, I MEAN YOU MIGHT WANT TO CHECK THE SITE HOURLY FOR THE PROJECTED 5 YEAR LIFE OF THIS PROJECT.

TO FIND OUT MORE! 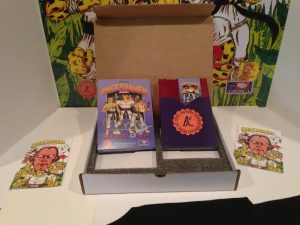 TO FIND OUT MORE!